I was reminded of these ‘four frightful words’, written by George Orwell when I was reading Steph Lawler’s brilliant article ‘Disgusted subjects: the making of middle-class identities’. Hygiene – or the perceived lack of it – has played a big part in constructions of ‘problem’ or ‘troubled families’.

Wofinden’s portrayal of the ‘problem family’ in 1944 is worth repeating in parts here:

“From their appearance, they are strangers to soap and water, toothbrush and comb; the clothing is dirty and torn and the footgear absent or totally inadequate. Often they are verminous and have scabies and impetigo … The home, if it can be described as such, has usually the most striking characteristics. Nauseating odours assail one’s nostrils on entry, and the source is usually located in some urine-sodden, faecal stained mattress in an upstairs room … One can only conclude that (the) children have never known restful sleep, that the amount of house-work done by the mother is negligible and that the general standard of hygiene is lower than that of the animal world”

Fast forward nearly 70 years and we get to Louise Casey, who recently used her speech at the Association of Directors of Children’s Services (ADCS) annual conference to raise the issue – and cost -of dental hygiene amongst ‘troubled families’:

One survey looked at 3,000 children in one area of the north east – an area that has been through every deprivation programme going, from city challenge, single regeneration budgets, through to new deal for communities and neighbourhood renewal – and more recently had the pupil premium spent on them.

A survey showed that not one of those 3,000 children had been for a routine dental check up – for free – but 300 of them had been to A&E for emergency dental treatment.”

Orwell highlights the effect of this focus on hygiene far better than I can (and he even touches on the issue of dental hygiene) so I’ll return to the paragraph he wrote after the four words in the title of this blog:

“That was what we were taught – the lower classes smell. And here, obviously, you are at an impassable barrier. For no feeling of like or dislike is quite so fundamental as a physical feeling. Race hatred, religious hatred, differences of education, of temperament, of intellect, even differences of moral code, can be got over, but physical repulsion cannot. You can have affection for a murderer or a sodomite, but you cannot have affection for a man whose breath stinks – habitually stinks, I mean. However well you may wish him, however much you may admire his mind and character, if his breath stinks he is horrible and in your heart of hearts you will hate him. It may not greatly matter if the average middle-class person is brought up to believe that the working classes are ignorant, lazy drunken, boorish and dishonest; it is when he is brought up to believe that they are dirty that the harm is done.” 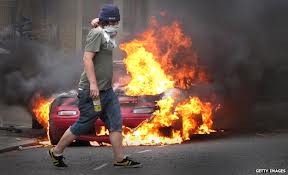 Following the riots in 2011, David Cameron was left in no doubt ‘that many of the rioters out last week have no father at home.‘ He went on to say of the rioters:

…where it’s normal for young men to grow up without a male role model, looking to the streets for their father figures, filled up with rage and anger.

So if we want to have any hope of mending our broken society, family and parenting is where we’ve got to start.

In his classic 1971 book Blaming the Victim, William Ryan notes that ‘the logical outcome of analyzing social problems in terms of the deficiencies of the victim is the development of programs aimed at correcting those deficiencies’. He goes on to highlight the ‘formula’ for ‘changing the victim’:

First, identify a social problem. Second, study those affected by the problem and discove in what ways they are different from the rest of us as a consequence of deprivation and injustice. Third, define the differences as the cause of the social problem itself. Finally, of course, assign a government bureaucrat to invent a humanitarian action program to correct the differences.(p8)

However, times have changed since the early 70’s and governments don’t need bureaucrats to develop programs of action anymore. There are ‘independent’ think-tanks who can do that for them. So, we have recently seen the ‘independent’ think tank, the Centre for Social Justice coin phrases such as ‘dadlessness’ and ‘men deserts’ to highlight the plight of ‘family breakdown’, which is one of their five ‘pathways to poverty’, whilst also, amazingly, calling for a more mature political discourse on family policy. Bourdieu has noted how these ‘ready-made phrases’ often serve to ‘mask the malaise or suffering as much as they express it’.

In a fascinating chapter in Blaming the Victim called ‘The Prevalence of Bastards’, Ryan explores the facts behind the idea that the poor are more promiscuous and less concerned about contraception or long term relationships than better off folk, (something I did very quickly here in a blog called ‘Dadlessness or factlessness’). Ryan argues that:

The ‘problem’ of illegitimacy is not due to promiscuity, immorality or culturally based variations in sexual habits; it is due to discrimination and gross inequities between rich and poor…

The real problem is not to get families off the welfare rolls, it is to make welfare – or its successor – dignified enough and sufficiently humanitarian to attract those lone mothers who now prefer to work and raise their children as best they can rather than endure the humiliation of a welfare life … The most obvious and pressing task is to develop a method of income maintenance that would permit fatherless families to subsist at a reasonable level of ‘health and decency’ without forcing the mother into the labor market. That is the welfare problem, plain and simple …

We complain about the sex lives of the poor in much the same way we complain about their having television sets. We no longer require of the poor that they starve to death on the public streets, but we do believe that it’s good for them to be a little hungry. We certainly won’t stand for them enjoying life in any way at all, else what would motivate them to over-come their somewhat shameful state of poverty

Last year I wrote three blog posts on The Trouble with ‘troubled families’ (which I’ve re-blogged here, here and here) not knowing that, nearly 60 years ago, a book called ‘The Problem of the Problem Family’ was published, authored by A.F.Philp and Noel Timms. The similarities do not end there however. In the foreword to the book, and using language very much ‘of the time’ Richard Titmuss writes that:

“(it would be true to say) that there is a long, though discontinuous tradition in this country of concern about a segment of families in the population, supposedly characterised by similar traits, and thought to represent a closed, pathological entity – in Lidbetter’s phrase, ‘a race of subnormals’. This ill defined group has come in for a great deal of attention and investigation. Survey has followed survey. Many remedies have been proposed and some pursued. A variety of measures have been put into practice by voluntary and statutory bodies. Yet … the debate about the ‘problem family’ has been conducted in a singularly uncritical manner. Precision in the use of words and in the observation of phenomena has been generally lacking; heterogeneity has been mistaken for homogeneity; biological theories have obscured the study of psychological and sociological factors; the classification and counting of ‘abnormals’ has proceeded regardless of the need to set them in the context of contemporary social norms; in short, what knowledge has been gained from all these inquiries has not accumulated on any theoretical foundations.“

There are lots more similarities in the language used and some of the issues identified with the concept of the ‘problem family’ and I’m sure I’ll be returning to this book a lot during the next three years…..

On page 39 of the government’s child poverty strategy, the above line can be found in relation to the ‘120,000 families in England with multiple problems.

This is consistent with the ‘new’ approach to tackling poverty in identifying familial issues and ‘problems’ as the ’causes and drivers’ of disadvantage and focussing on the most vulnerable and the most disadvantaged. This post explores why it is problematic that the troubled families agenda has become a ‘core element’ – both implicitly and explicitly – of the ‘new approach’ to tackling child poverty.

In our first post on this subject, we identified that these 120,000 families were identified back in 2004. (See Ruth Levitas’ working paper on ‘troubled’ families for a fuller critique of the problems with the identification of 120,000 such families). In 2004, there were 2,800,000 children living in households with…

In December of last year, David Cameron announced that his ‘mission in politics’ was to fix ‘the responsibility deficit’ and to support this goal, he committed ‘£448 million to turning around the lives of 120,000 troubled families by the end of this Parliament’. Everyone will no doubt wish the Prime Minister well with this aim of turning around the lives of some of our most disadvantaged families but one must strike a note of caution. What he is proposing to do has never been achieved (if it had, he presumably wouldn’t need to do it). And what is more slightly more troubling, is that the government appear to be intent on doing the same things that others have done in attempting to help ‘problem families’, whilst making unprecedented cuts to public services at the same time.

Professor David Gordon of Bristol University has written that:

The idea of a group of… There has been a lot of media coverage recently of the ‘troubled families’ agenda and the ‘launch event’ held last week in Downing Street. At the event, David Cameron said:

“I’m committed to transforming the lives of families stuck in a cycle of unemployment, alcohol abuse and anti-social behaviour, where children are truants from school – troubled families who cause such negativity within their communities and who drain resources from our councils.”

Laudable aims indeed, but the approach the government is taking has come in for a lot of criticism and so we’ve decided to do a couple of blogs exploring these. This first post will look at the way that problem families have been ‘identified’ with a couple of follow up posts looking at the concept of a homogeneous bunch of ‘troubled families’ and the unfortunate conflation of this policy with the child poverty agenda. We are not attempting to deny that there are…